If you’ve visited the Turkish Rivera before you’re sure to have noticed the impressive number of tourist-filled sailboats gliding over the calm Mediterranean waters. Called ‘gulet’ in Turkish, these traditionally made wooden yachts are widespread throughout Southwest Turkey and all of the Eastern Mediterranean. The name itself is a loanword from the Venetian ‘goleta’, which ultimately has its roots in Celtic language and is related to the English ‘gullet’. The definite origin of these two or three-masted vessels remains up for debate; one theory argues that this type of boat (schooner) was used as a fishing vessel or for sponge diving in the region since antiquity. While others believe they were used as freight vessels in the Black Sea or even imports from further off lands, in the 1970s, the gulet boomed alongside the new influx of tourists to the region. Traditionally and still to this day built predominately in Bodrum and Marmaris, these modern day tourist gulets sail all along the length of the Turkish Rivera and beyond, catering to tourists and sailing enthusiasts from all corners of the globe. 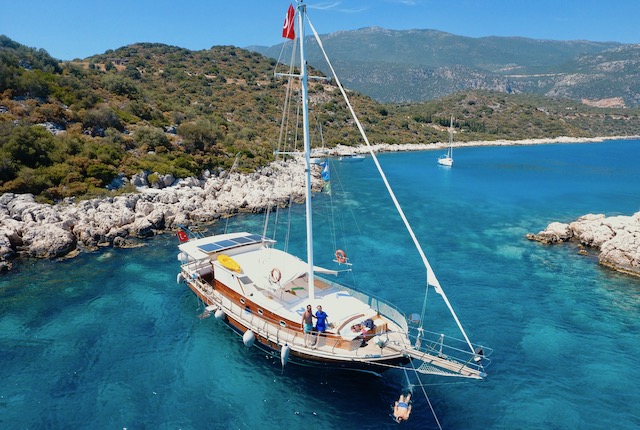 The longer of the sailing trips aboard these boats are known by the term ‘Blue Cruises’ or ‘Blue Voyages’. The term originated in Turkish literature and was featured in and as the title of multiple books of popular Turkish authors in the early to mid-20th century. Today, these week-long cruises allow holiday-goers the chance to experience the beauty of the region of Turkey known as the Turquoise Coast which stretches along over 1000 kilometers of winding coastline of the southwest provinces of Mugla and Antalya. Known for its warm sea and climate, backdrop of scenic mountains, and gorgeous secluded beaches, Turkey’s Turquoise Coast attracts visitors looking to experience not only the beautiful pine forests, rocky cliffs, and crystal clear coves, but all of the ancient ruins and history the region has in store. With destinations including the renowned fishing village turned holiday destination of Bodrum, to the internationally known coastal town of Fethiye, to the sunken city of Kekova and quaint, nearby town of Kas, all the way to beautiful beaches of Antalya’s Olympos and Cirali, Blue Voyages allow vacationers to experience all that the Turkish Rivera has to offer. 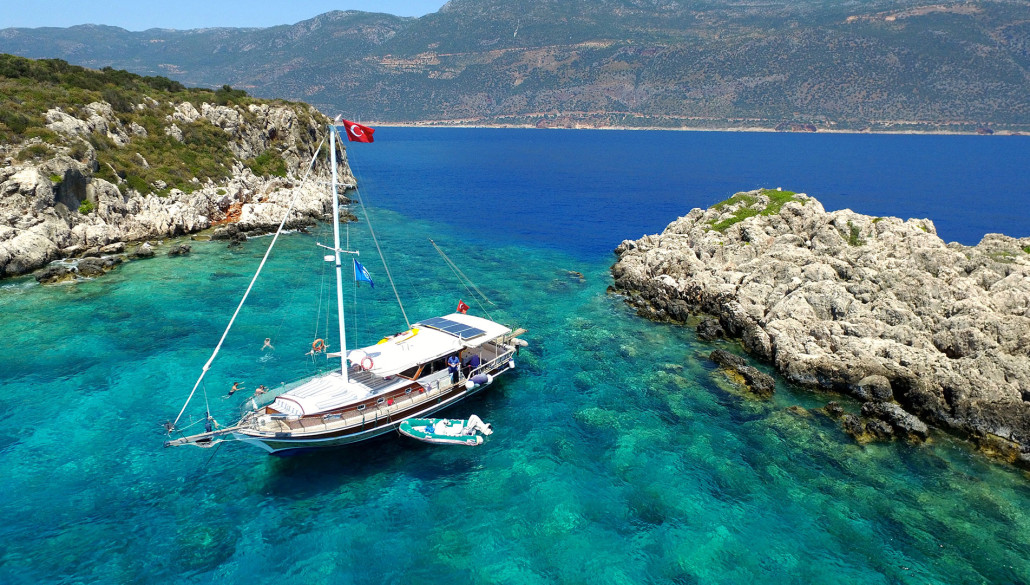